Loaded Baked Potato Soup. This recipe for potato soup includes bacon, onion, ham, sour cream, cheddar cheese, green onions—and plenty of potatoes, of course. Use a high-starch variety of baking potato, also known as a russet, for this recipe, to ensure that your loaded potato soup has a hearty body and a creamy texture. When done, the tip of a paring knife should go through the potatoes easily. 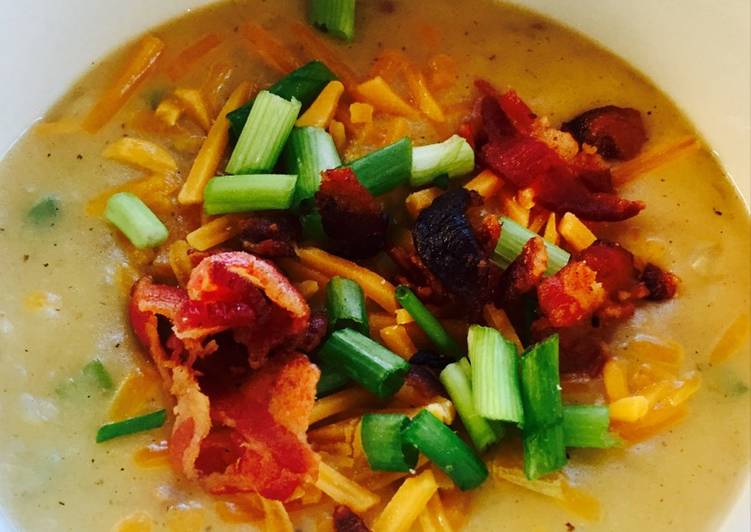 Ultimate Loaded Baked Potato Soup tastes just like a fully loaded baked potato but served up in a bowl of creamy goodness and topped with all of the best baked potato toppings! This is one of the best soups of the fall and we make it year after year with rave reviews. In a stock pot or Dutch oven, melt the margarine over medium heat. You can cook Loaded Baked Potato Soup using 11 ingredients and 5 steps. Here is how you achieve it.

Gradually stir in milk, whisking constantly until thickened. This loaded baked potato soup can stay warm (in a pot on the stove or in a slow cooker) for hours. It thickens up even more the longer it sits…and if it cools a bit. The simple flavors combine into an amazingly delicious and comforting soup.

Set a large Dutch oven over medium-high heat. When cool, crumble and set aside for garnish. Remove bacon and place onto a paper towel lined plate to drain. This healthy loaded baked potato soup recipe is inspired by the comforting flavor of fully loaded baked potatoes with bacon, Cheddar, sour cream and chives. To make a vegetarian version of this potato soup, omit the bacon and use "no-chicken" broth.